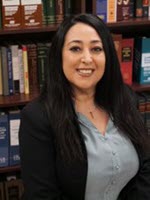 Ellie has been a practicing Paralegal since 1995 and has her Paralegal Certificate from Phillips College. Ellie joined Catanese & Wells in July of 2020 as a Litigation Paralegal to T. Randolph Catanese, Esq. She received her bachelor’s degree in Political Science from California State University, Northridge.

Ellie was born in Shiraz, Iran before moving to the United States as a young child where she lived in Mesa, Arizona for a short period of time before moving to Los Angeles, California. She was raised in the San Fernando Valley and considers herself a valley girl. Ellie speaks fluent Farsi.